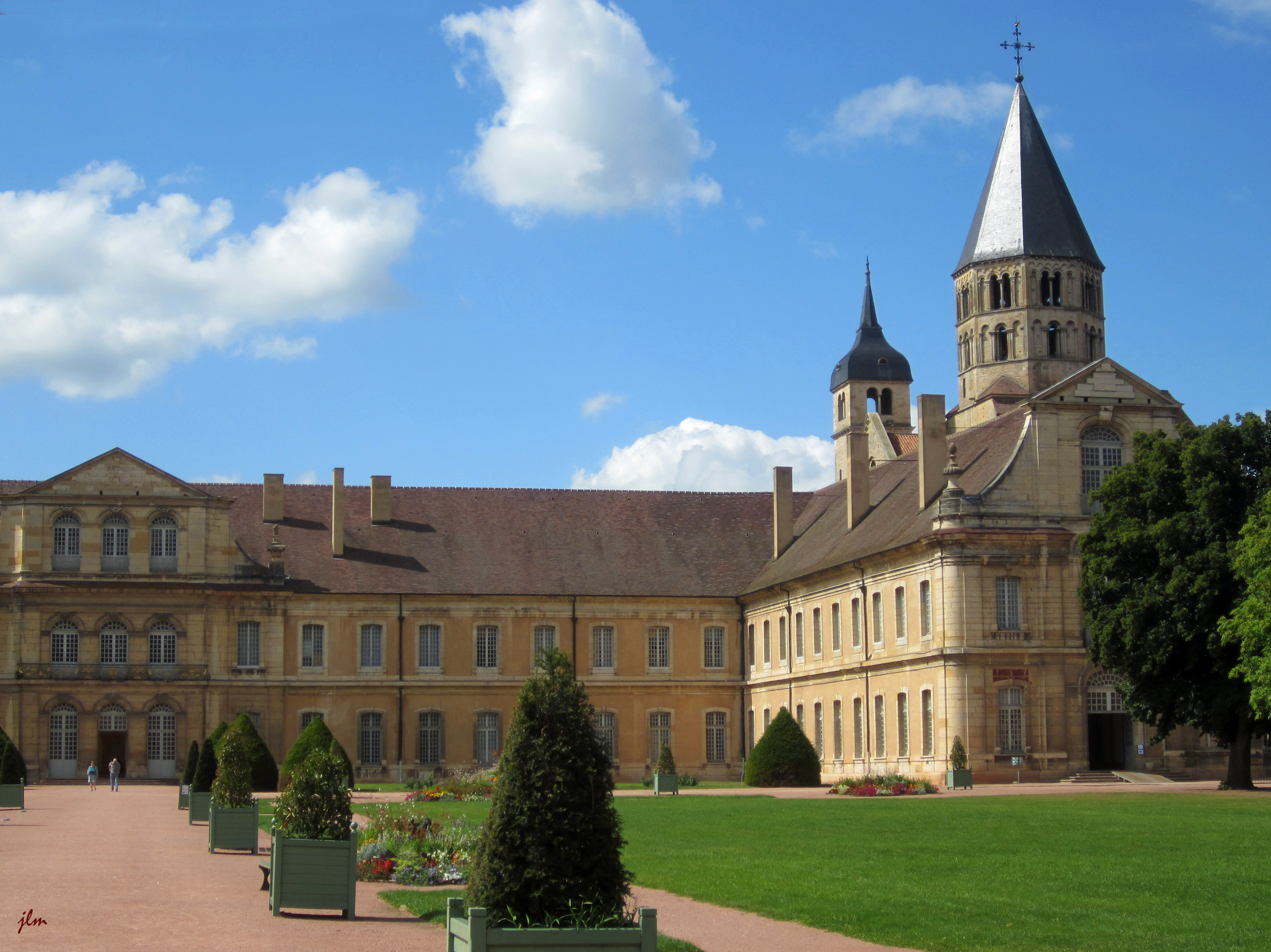 After one century of Norman devastations and secular interferences in the monasteries’ administration, Cluny falls within the Carolingian reform that unifies Western monasticism around the rule of Saint Benedict.

William the 1st the Pious, Duke of Aquitaine, founds the abbey on a plot of moor close to the Saône River, in Cluny, given to twelve Benedictine monks, at the dawn of the X century.
A charter guarantees the independence of the abbey: strict compliance with the rule of Saint Benedict, absolute independence from temporal and spiritual powers except from that of the Pope and consecration to Saint Peter and Saint Paul, and lastly, obligation to embrace « daily acts of mercy towards the destitute, paupers, foreigners, travellers ».
The abbey grew thanks to long lasting holy abbots (Bernon, the 1st abbot appointed by William the 1st followed by Odon, Mayeul, Odilon or Hugues) and shines upon the West by playing a key role in the development of modern Europe. The peaceful valley of la Grosne is conducive to contemplative life but represents a geographical hub between France under the 1st Capetian kings and the Germanic Empire; through the Auvergne and Aquitaine, people communicate by means of the Way of Saint James. The relations and the very spreading of the Cluniac congregation will follow these main routes.

The art of Cluny fulfils the faith of the destitute. Paintings, sculptures and furniture were of great richness. Part of the sculpted decor remains, especially the figured capitals of the columns of the apse roundabout, which represent the tone of music, the rivers and flora of earthly paradise, the seasons and cardinal virtues. We owe the construction of an abbey church from 1088, which will represent the power of God on earth, to the abbot Hugues de Semur: « Maior Ecclesia », the largest Roman church of Christianity ever built, whose vaults culminate at 30 meters above ground. 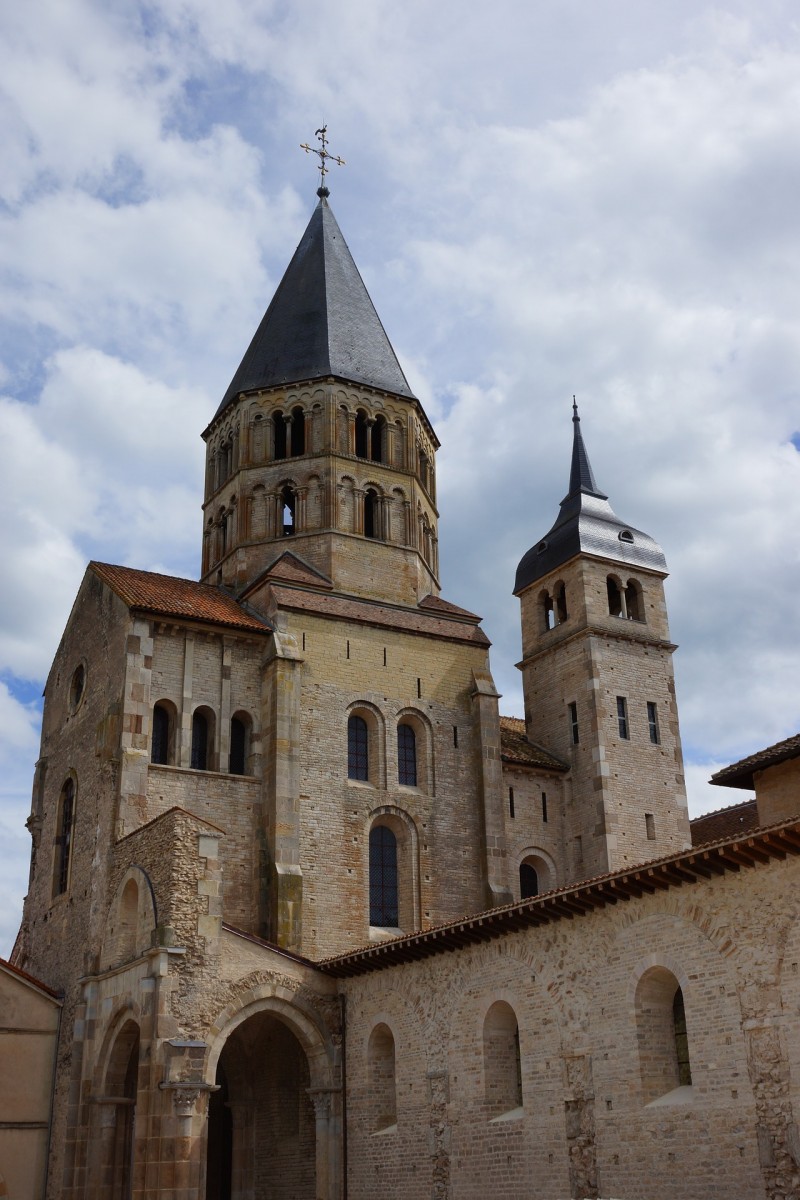 Roman Burgundy drew inspiration from it, especially in Paray-le-Monial and in Autun. Its role in the evolution of Roman monumental architecture and sculpture is substantial. The verticalism and scale of its architecture will impact Gothic art, while its double transept plan carried on in English cathedrals.
Cluny was expressly created for acts of mercy: thus, Saint Odilon generalized the « truce of God », meant to restrain endemic wars or institutes All Saints’ Day on the 2nd of November.

A beacon of Christianity :

Cluny’s Monks leave to rebuild several crumbling monasteries: Saint-Benoît-sur-Loire, Saint-Maur-des-Faussés and to build new ones. Close to 1400 Cluniac communities saw the light in Europe headed by Cluny. The spread of scholasticism, economic development and some internal causes remove the leadership role from Cluny as early as the middle of the XII century. It « fades » before other orders. Yet, illustrious abbots will succeed each other at the head of the abbey over the subsequent centuries, such as Richelieu or Mazarin.
Around 1750, conventual buildings are rebuilt and the abbey is thus equipped with a vast classical style complex.

The monks will not occupy the premises because the Revolution starts soon after the works. They are evicted and the buildings are seized as national assets and then sold. The vast church is then bought by material merchants and becomes a stone quarry. This master-piece of Romanesque art is progressively dismantled. Today, the remains give us an idea of the vastness of this edifice.

The abbey of Cluny holds a central place in monastic history, as a spiritual, intellectual and artistic haven of one of the most flourishing branches of the Benedictine order.
In 2010, the Paris Mint even produces a set of coins in commemoration of the 1 100 years of the abbey.
The abbey of Cluny is at the top of the Cluniac order, great cultural itinerary of the European Council, which comprises more than 140 sites, in France, in the United Kingdom, in Belgium, in Germany, in Switzerland, in Spain, in Portugal and in Italy.